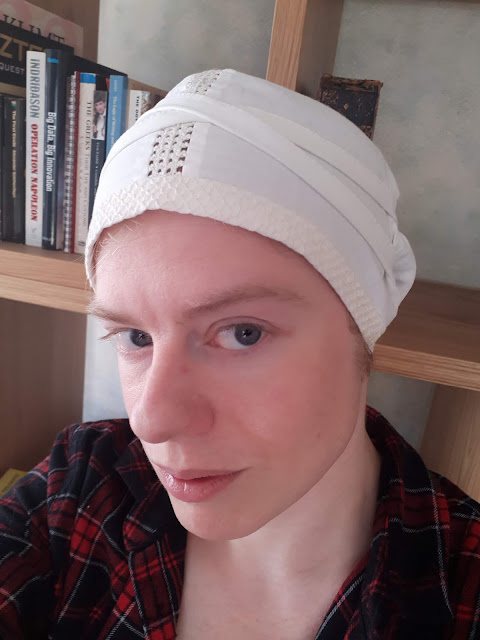 In the later medieval period, caps were an everyday clothing item for both men and women.  They kept people's hair clean and out of the way, stopped people's heads from getting sunburnt, and gave women something to pin their veils onto.  Like other utilitarian objects they don’t usually survive, but there is a 14th century cap which has been preserved as a relic, because it’s said to have belonged to St Birgitta of Sweden.  It’s an interesting item, made from two halves joined together with knotwork and finished with an embroidered band.

YouTuber Morgan Donner has put together two excellent videos on how to make this cap.  She has a video specifically about how to do the knotwork:

...and a longer video, which takes you through the entire process of making the cap.

Thanks to Morgan's videos, I was able to replicate the cap.  There is also a very good tutorial from Cathrin Åhlén at Katafalk, complete with a pattern, which I found really useful.

My knotwork is made from 6 linen threads, each of which should be about 5 times the length of the knotwork.  I started at the back of the cap and left half of each thread as a tail while I did the herringbone rows.  Then I used the tails to weave around the herringbone stitches and thus complete the knot.  It’s annoying if one of the tails isn’t long enough, but not a huge problem because you can darn in another length of thread.  Small mistakes in the weaving aren’t obvious either.


I found that a strip of thermal-backed curtain fabric works really well as a backing to stabilize the two halves of the cap while you complete the knotwork.  However, you’ll need to be very careful that whatever you use to draw the grid on your curtain fabric isn’t going to rub off onto your cap, or use a washable fabric pen that won't matter if it rubs off.  I used a biro, and was not very happy to discover that even when dry it transferred itself to my cap.  Fortunately, Sard Wonder Soap lives up to its name.

In the comments on Morgan's video about making the cap, someone suggested it might have originally been made for a child, with the knotwork added later so it would fit an adult.  I also wonder whether it might have been a regional style.  The images of caps which don't appear to have embroidery come from other parts of Europe, and the design feels very Scandinavian to me.  It reminds me of the wire posements found at Birka and other places, and it's based on the number 6, which is a recurring pattern with ancient Scandinavian textiles.

The Challenge:  Everyday.  Caps like this were part of the 14th century European woman's everyday wardrobe, although they weren't always embroidered.

Material: Part of a pillowcase that I'm reasonably certain is linen.

Pattern: Cathrin Åhlén's pattern, which is available on her blog.

How historically accurate is it?  It's made from linen like the original, in the same way as the original, so far as I can tell.  While it's not an exact copy, I like to think it's pretty close.

Hours to complete:  Around 10.

First worn: around the house after photographing.

Total cost: Probably a dollar or so.  I got the pillowcase, along with another pillowcase and a sheet, for $6 at the Sallies.
Posted by Stella Anderson at 17:57